Many of you know I got a new MacBook Pro and I have been giving some updates on migrating over from the PowerBook G4 to the MacBook Pro. One of the big +’s of the MacBook Pro is that it is Intel based, which means you can run virtually any OS on it, including Windows.

I downloaded and installed Parallels Desktop for Mac, which enables me to run Windows on my Mac. It is now set up and it runs pretty well. I am still tinkering with setting up a shared folder, so I can drag and drop between the two OSes. Ultimately, I would like to move over the one application I need a PC for, to this parallel desktop solution. I also hear that Apple’s next OS Leopard may switch the BootCamp software to run both OSes in parallel, so this application may no longer be needed then. 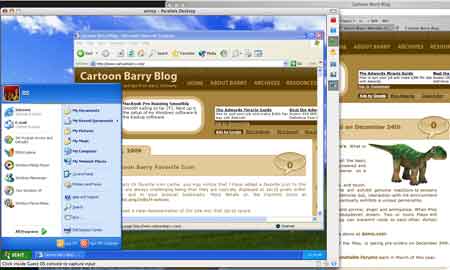 So a few more days of testing and then Ill move over the application and trash my PC.