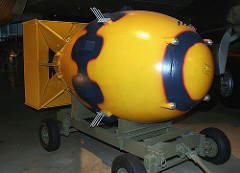 What were you doing between the ages of 15 and 17? Well, a kid in Rochester Hills, MI named Thiago Olson spent those years creating a Nuclear Fusion Reactor.

In the basement of his parents’ Oakland Township home, tucked away in an area most aren’t privy to see, Thiago is exhausting his love of physics on a project that has taken him more than two years and 1,000 hours to research and build — a large, intricate machine that , on a small scale, creates nuclear fusion.

Nuclear fusion — when atoms are combined to create energy — is “kind of like the holy grail of physics,” he said.

Wikipedia has a ton of details on Nuclear Fusion and explains;

The only fusion reactions thus far produced by humans to achieve ignition are those which have been created in hydrogen bombs.