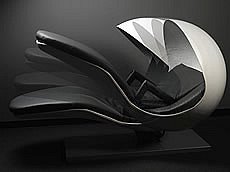 Now it will be in style to sleep at work. I know a lot of the world takes afternoon naps. Yea, they close their doors in the middle of the day to take a nap or do miscellaneous work. But now there are companies selling what are called Sleep Pods.

The news is buzzing about this, over 600 stories currently, on how sleeping during the day can help reduce heart attacks.

I saw a thing on CBS news last night, On-The-Job Naps Lower Heart Risk. They showed off this company named Metro Naps. Metro Naps sells a Sleep Pod and has dozens of locations around the world for workers to stop in and take a quick cat nap during the day.

Why am I blogging this? Because one of my employees asked when RustyBrick will be installing one of these puppies in the office. I did not answer him.

I wonder who paid for the study stating:

A six-year study of nearly 24,000 Greek adults found those who regularly took midday naps lowered their risk of dying from heart disease by more than a third.

Those who made it a practice of napping at least three times a week for a minimum of 30 minutes had a 37 percent lower risk of dying from heart disease compared to non-nappers.

SEOs, currently no one is sleep pods or work naps — do they have an affiliate business?