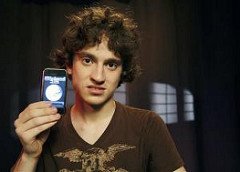 A teen hacked the iPhone so that it is now unlocked and working on a non-AT&T network. The teen is 17-years-old and Glen Rock, N.J. Which is not too far from me.

The 17-year-old Hotz said he will be sending the three new iPhones to the three online collaborators who helped him divorce Apple Inc’s popular product from AT&T’s network. The job took 500 hours, or about 8 hours a day since the iPhone’s June 29 launch.

His name is George Hotz.

George made a deal with CertiCell. CertiCell is giving George a Nissan 350Z plus three 8GB iPhones, in exchange for the unlocked iPhone.

Now that is one killer summer gig.