Europe To Allow Mobile Airplane Use 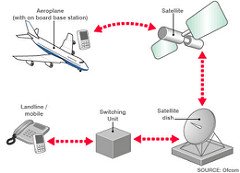 I can’t wait for the day where you can use your mobile device on an airplane, with the airplane’s door closed.

In fact, I would be totally cool with airlines banning the use of the phones on the plane, as long as we can use our data connections. 🙂

The amount of time I waste on a plane, stinks. So it is cool to see Europe clears mobiles on aircraft:

The decision means that mobiles could be used once a plane has reached an altitude of 3,000m or more.

The graphic above shows how the transmission would be bounced off a satellite, down to a local cell tower. The 3G network won’t work yet, but it may follow soon.