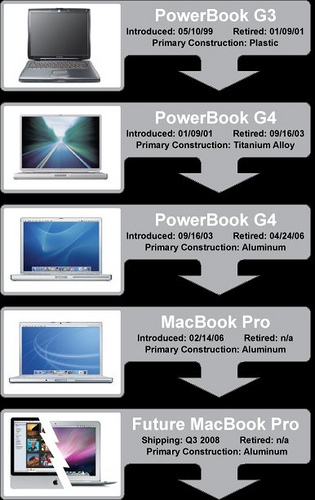 AppleInsider reports that the next line of Apple notebooks will have a totally redesigned shell to them.

Apple Inc.’s existing MacBook and MacBook Pro notebooks will be the last of their breed, as both product families are destined for major design changes upon their next refresh, AppleInsider has learned.

When exactly is that? It appears to be some time in the third quarter of this year. About the same time I plan on getting a new Apple laptop.

The new laptop design is expected to be more environmentally sound. AppleInsider said sources tell them that the design will be made of “eco-friendly materials such as aircraft-grade aluminum and stainless steel.” What else might we expect on the new Apple notebook designs? AppleInsider adds, “matte black on portions of the casings, oversized trackpads, and the adoption of the MacBook Air’s keyboard by the MacBook.”

It feels like my MacBook Pro, which I got in August 2006, is seriously slowing down. I previously thought I ordered it in 2005, or three years ago. But it has been less than two-years now. I suspect, when these new Apple notebooks come out, I’ll be one of the first to get them. Should I wait? Probably, but with my current laptop slowing down with certain applications – I doubt I will be able to hold out.

On the right hand side is the timeline of Apple notebooks, for the “Pro” editions. I can tell you that I had every single model listed there, from the PowerBook G3, two G4s, my current MacBook Pro and then in August, hopefully a new one.