To many of you, I have been blogging forever. But I have only been blogging since 2003. Jeremy Zawdony started blogging in 2002 and he was probably my first favorite blogger. I have been following his blog since then for years.

So, when today, he announced he is leaving Yahoo to work at a “smaller company.” Yes, we all know a lot is going on with Yahoo now, and we hear rumors of a major announcement in 30 minutes from Yahoo, but Jeremy says he is not leaving for any of those reasons. 8.5 years at Yahoo and now on to bigger but smaller things. 🙂

In any event, Jeremy has been a role model blogger to me. I personally learned a lot about blogging from him. In fact, it was an honor to speak on a panel with Jeremy at PubCon, the panel was named Blogging For Fun & Profit. Here is a picture, although you can’t see Jeremy (look for arrows pointing him out), he is hiding behind the podium when I was speaking: 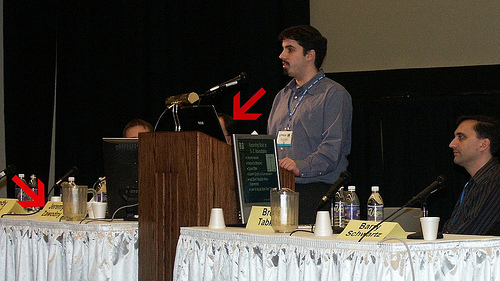 Anyway, I wanted to wish Jeremy best of luck in his future ventures. I am sure whatever it is, it will be successful!