RustyBrick, The “Cool Company” in the Building 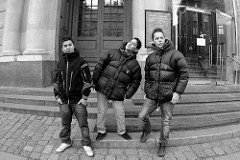 Last night, I was with a group of people, 10+, who work in the building. Either they work for other companies in the building or they own the company.

In any event, one guy said – I wish I could just hang out with you (RustyBrick) for a day. He added something like, “you guys seem like real fun, cool guys and do cool things there.”

I laughed, almost saying most of our work is boring web software.

But then I looked around and saw who I am comparing RustyBrick to. The type of businesses in my office building include lawyers, mortgage brokers, doctors, recruiters, and so on.

If I had to say, RustyBrick is probably the coolest company in the building. But that doesn’t say much. It is nice to know that people think so, at least.