Got New Tefillin From a Sofer (Scribe) That Blogs 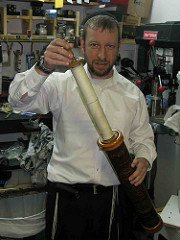 Observant Jewish men put on what is called Tefillin during weekday morning prayer services. I blogged about this when my oldest nephew put them on for the first time – proud moment.

I recently learned that my Tefillin, which I received when I became Bar Mitzvah were not all that great. They were probably “kosher” but they were not much beyond being kosher or what you would consider a quality set of Tefillin. So, I ordered a new pair of Tefillin from a Sofer (Jewish scribe) that turns out to be a blogger also.

Tefillin are kind of like diamonds, you need to be able to trust the person who sells them to you. He explained that he can’t compete with stores selling Tefillin for $200. He sells higher quality Tefillin (more care goes into making them) then the cheap sellers. The way he shows people who find his web site that he is honest, experienced and trustworthy, is through his blog. I found it funny that someone in the Jewish scribe business understood this. He understands social media and all that blogging stuff, even though he is in the religious business. 🙂

Anyway, if your in need of quality Jewish products like Tefillin, Mezuzahs, Torahs and so on – this guy is the real deal!

Just too funny… How fitting is it that I bought this from a blogger?