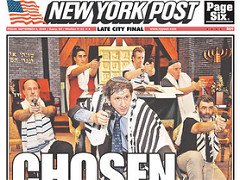 This is both funny and interesting…

I was in the 7/11 last week and some guy was holding the New York Post. On the cover was a funny picture of Jews in a synagogue with fake guns. It looked like some type of play or movie. The story is named Gun-Toting God Squad: Rabbis Pack Heat, CBS News.

In short, these people are running a group named “International Security Coalition of Clergy.” Basically, they teach synagogues and churches how to prepare themselves in case of someone coming in to the synagogue or church as a threat.

There are other funny titles from other papers, such as Go ahead, make my high holiday from the NY Post, Kick-ass rabbis team up to defend synagogues from Y-Net, What Chutzpah! Rambo Rabbis Gun for Terrorists from NBC NY, and Tough Jews: Revenge of the Nebbish? from Politics Daily.

If you haven’t see You Don’t Mess with the Zohan and you know Israeli culture, you should check it out, it is funny – to say the least.

Here is a news clip of the Rabbi’s in action: