Picture of Yourself in Your Company Lobby 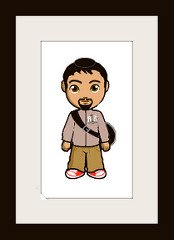 I had a meeting recently and when I entered the lobby, I noticed a picture of the guy I was going to meet with.

I personally found it a bit strange to see a picture of the individual in his own lobby. It is not like this company is a talent agency or something. They do very technical stuff, in a very specialized market. To have a picture of this person in the company’s lobby, just seemed out of place.

I was thinking, maybe I should hang a picture of me (see up and right) in the lobby of RustyBrick. Think it would be a good idea?

It kind of reminds me of that show my wife likes, Flipping Out. The guy, I forget his name (update, Jeff Lewis), has a self-portrait of himself behind his desk (see image 8 of 11). So when you are sitting at his desk, facing him – you are forced to look at two of him.

Maybe that is a good intimidation factor? Maybe I should do that? Hmmm…. Or maybe not.

SEO Side Note: That episode I saw had Jeff Lewis and his “partner” of some sorts argue about his web site. Supposedly, his partner bid on his name in AdWords. He basically showed ads for this guys name and drove them to his web site. Then when Jeff made his own web site, he used a .tv TLD, and Jeff said, he learned the hard way that .tv domains don’t rank in Google. LOL – funny all the myths in SEO. .TV domains do rank in Google, but .tv is a country level top level domain (TLD) for islands of Tuvalu and thus Google geo-targets it for that region, unless you specific you do not want it to be geo-targeted in Google Webmaster Tools. Ah, SEO – too much fun.