Getting To Parades Is No Fun 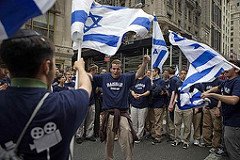 This is not a political post, I don’t talk politics here (😉).

Every year there is a parade for Israel, which celebrates the anniversary of Israel’s Independence. Many countries have a parade for their independence in NYC, and Israel is no different. I believe Salute to Israel runs the event, by the way.

Personally, I have not been to this parade in a long time. But yesterday I went with the family.

I don’t see how they run parades in NYC. The parade goes from 57th Street and Fifth Avenue and goes up north on Fifth Avenue to 74th Street. It is between 11am and 4pm, which means those streets and the streets around them are closed off pretty much all day Sunday.

I drove in – a mistake. It took my 40 minutes to get to NYC and then an hour to get from NYC to where I needed to get to to park. Every parking spot was taken and every parking garage was full. I had to drive to 86th and Park to get a spot. That is just under a mile away from the end of the parade, or a 16 minute walk.

Leaving wasn’t any better. Took us forever to get out of the city.

I guess it is nice to have a parade in the largest city in the world – but it would have been a lot easier to do it in a place that was less dense. 🙂

Anyway, you can see some news articles on the parade at Google News.

Next year, if I go, maybe we will take a bus.