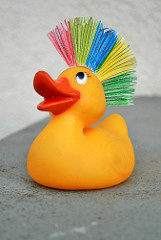 Many of you know what is going on over at Digg now. The users are revolting and posting tons of reddit.com stories to it, which is kind of a competing site. The revolt is over recent changes to the site, and their top user base is not happy with it.

So all the top users are standing up by submitting stories from reddit.com. I find it refreshing and a sign of camaraderie at it’s best.

Why does it remind me of 11th grade? Well, my 11th grade class, at least the subdivision I was in, represented true camaraderie. How so?

Looking back at it, I am not proud, but it was a true sense of camaraderie, which is why I will share it.

Whenever one of our fellow students were penalized unfairly (as judged by the kids in the class), the class stood together. There were times where the class, as a whole, would not answer questions raised by the teacher. There were times where no one would answer the tests given to us, as a sign of camaraderie for our friends in our class. The class, no matter what, always stuck together, no matter what the consequence.

Back then, it was fun. But clearly, it was kind of foolish, but hey – that is kids for you.

Then came 12th grade. The administration split up the class and the camaraderie died with it. In fact, there was one student in our new class that believed there was still camaraderie in the new class. To prove it, I did something stupid, but I did it respectively as possible. The next time someone was asked to leave the class for misbehaving, I stood up and said nicely something like “If he is asked to go, I would like to be asked to leave as well.” I looked around and no one else said anything, and I walked out of the class. I then explained why I did it to the teacher later, who found it all very interesting. But I had to prove the point.

When I see what is going on over at Digg now, it so reminds me of that camaraderie. The beauty here is that these are people coming together from all parts of the world, all ages and all backgrounds, supporting each other on a site they loved.