Paying To Store Trash: The Trash Can Purchase 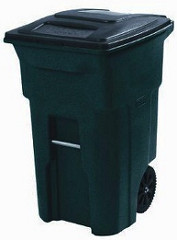 Ever since moving into my home I never wanted to pay for a trash can.

The concept of paying for something to store something that you are throwing away, just well – doesn’t necessarily make full sense to me. I know it has to go somewhere but to pay for a container to keep it somewhere, seems wasteful.

Yesterday, almost 3 years since moving into my house, I spent money on my first trash can. I bought a 64 gallon Toter trash can at home depot.

What!? I didn’t have a trash can for 3 years?! No, I did. I just took used ones from family. But they won’t store enough trash for the upcoming holidays. When I have company over for three-days straight, it produces a lot of trash. So I decided to go big and put up some money to store trash.

Why Toter? Well, it was the best value for the size. I needed one that can fit a lot of trash and that had the lid attached to the basket. The already lost two lids due to the garbage disposal men or women throwing them on the ice and snow and then them blowing away, never to be found again.

I hope this Toter lasts me a long long time.