Traveling During The First Year Of Jewish Mourning (Aveilus) 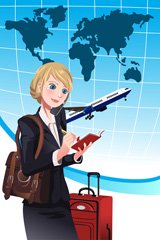 This will be my first blog post here in over three months, since the passing of my mother. I was thinking of not posting anything for the year but I have things to share and this is where I do it when it is not related to business or search. 🙂

I go to a fair number of conferences for speaking or planning purposes and being in “Aveilus” makes it harder on a number of levels. You think eating kosher while traveling is hard, saying Kaddish is much harder.

It is the custom for the sons of the deceased parent to say Kaddish during prayer services (davening) three times per day, every single day. Once in the morning, once mid-day and once at night. Saying Kaddish is easy, the hard part is doing so with a “minyan,” ten Jewish males over 13 years old. Typically this is done in a synagogue but it can be done in an office or any place where there are ten male Jews over 13. We made a office afternoon minyan at my company to help accomplish this (that is for another blog post).

So when you travel on airplanes for 6+ hours and when you go to places where there aren’t many Jews, getting a minyan of 10 male Jews isn’t easy. So you need to prepare a bit.

For example, flying to San Jose, California for the SMX West conference isn’t so simple. I can’t leave too early because I will miss the opportunity to say Kaddish in the morning. flying mid-day, I will miss afternoon services and flying too early in the night time, you can miss night services. Flying to San Jose or SFO late night isn’t really possible. So I timed mine where I can leave around 5pm EDT and land around 9pm PDT. I will be able to get a minyan the morning of, the afternoon of, but it looks rough in getting one the night of in San Jose. There is actually a synagogue not far from the conference venue but I’ll miss night services Sunday there. Coming back is a bit easier but still not guaranteed.

Now, once you arrive at the location. Instead of just bunking up in the hotel and not worrying, now I need to figure out a way to schedule things to get to and from synagogue three times a day. I have to make sure not to have sessions, speaking slots and/or meetings around those times. I need to make sure not to schedule dinners at those times at night. Plus, I need to rent a car, so I don’t have to spend on a taxi several times a day to/from synagogue/hotel/venue. It makes things way more complex.

I am going to try, somehow, to see if there are enough interested Jews at the SMX West conference to at least try to have an afternoon service and maybe an evening service in a room at the event. We did that at SMX Israel, but as you can imagine – it is much easier to manage in Israel.

Those are just two cases of how travel is complicated.

Image credit to BigStockPhoto for traveling