Last night, I went back to one of my most favorite places to eat, Noah’s Ark – with the family and a close friend. My brother-in-law was there and he was a bit peeved that he did not get what he won from Noah’s Ark.

Several months ago, he told me he ate what is called the “Ginormous Burger.” If you eat the whole burger, Noah’s Ark promises to give you a T-Shirt and put you on their web site. Neither has happened!

I snapped a picture of the menu from the restaurant, to show you (at least) part of the claim: 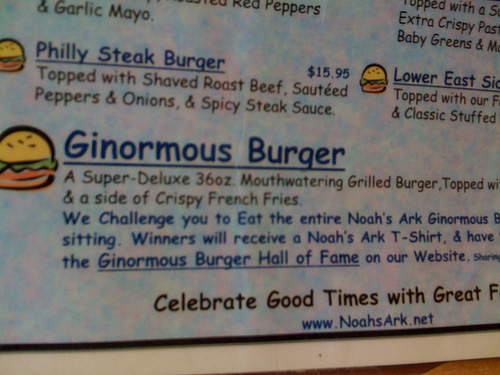 So, today, I scanned their web site and found no mention of any winners or even the Ginormous Burger. So, I did a Google site search for “ginormous” and found nothing. Clearly something is wrong here. I doubt my brother-in-law lied to me about finishing that burger and even if he did, I am sure someone else was able to do it but yet, there is no mention of anyone stepping up to the challenge, on the Noah’s Ark web site.

Now, I can understand that the web design company might not be around to update the site. But at least give the man his T-Shirt.

Noah, I still love the food. 🙂

Update: They finally crowned him, a month after this blog post.