Google Saved My Rusty-Car From Being Towed 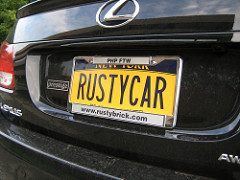 Yesterday, I was at a meeting and I received a call and a bunch of text messages from my office telling me my car would be towed if I don’t move it now.

What happened was, I arrived at the office building, the parking lot was like a zoo. I found a spot, but apparently the spot was in a loading dock.

A truck arrived and wasn’t able to fully unload. They saw my plates, the RustyCar License Plates, Googled them and called my office.

The office called me and within minutes I was able to move the car. At that time, there were a bunch of open spots but whatever.

So there you go, the my ugly license plates that reads RustyCar led upset people to RustyBrick and helped save my car from being towed.

One of the perks of having a branded license plate – oh yea, I am sure there are plenty cons.